Non-profit organizations fight against hunger through a generous financial contribution.

St. Mary's Food Bank reaped the benefits of the ASU Undie Run. Adam and his brother the Move For Hunger guys pulled up St. Mary's dock this am in a 16 wheeler ASU semi To drop off food. Move For Hunger is proud to announce their recent partnership with Mango Moving at the Signature Level. Mango Moving LLC, a Kansas City-based national moving company, has committed to support Move For Hunger's fight against hunger through a generous financial contribution. 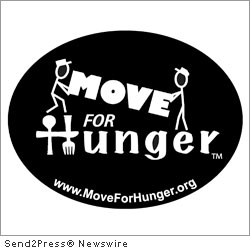 Move For Hunger is a non-profit organization that works with moving companies and other members of the relocation industry to combat the growing hunger problem in the United States. Many people throw out a good deal of "stuff" when they move. Unfortunately, that "stuff" often includes food that could be delivered to a family in need rather than thrown away. In partnering with Move for Hunger, Mango Moving will provide their customers with services to donate any food items that they won't be moving instead of disposing of them. Mango will pack and deliver the food directly to Harvesters Community Food Network or a local food bank at no cost to the customer. "Moving can be a stressful process.

The Move for Hunger program gives customers a way to simplify part of the moving and packing process while giving them an opportunity to help families in need," said Mango Moving COO, Robert Vespa. "We're proud to be teaming up with such a great organization and a worthy cause." "We are so happy to have Mango Moving join the Move For Hunger family for 2012," said Gavin Christiansen, Director of Operations at Move For Hunger. "Their commitment to ending hunger will help provide life saving meals for the most vulnerable in the Kansas City area." About Move For Hunger: Move For Hunger is a non-profit organization that works with relocation companies across the country to pick up unwanted, unopened food from those who are moving and deliver it to local food banks across the country.

To date, Move For Hunger is working with over 250 movers in 40 states and has collected more than 420,000 pounds of food. For more information or to find out how you can help support Move For Hunger, visit www.MoveForHunger.org and make an online donation to help our hunger relief efforts. About Mango Moving: Mango Moving, LLC, is a fully licensed and insured nationwide moving company and leading provider of affordable moving services and storage solutions.

Working directly with our network of experienced transportation, packing and loading professionals, Mango can coordinate every aspect of your move or just the pieces that fit your needs to provide you with the very best moving experience. Every Mango move is backed by our exclusive Best Price, On-Time Guarantee, ensuring that a Mango move will be the best move you can make. For more information, visit www.mangomoving.com .
Posted by VesInteL at 5:25 PM No comments:

Tweet
UNITED NATIONS -- Aid agencies are calling it the worst drought in 60 years. East Africa is in the midst of its worst drought in more than 60 years, with as many as 10 million people at risk. The drought has led to crop failures and food shortages in parts of Ethiopia, Kenya, Djibouti and Somalia, and now a refugee crisis looms as people leave their homes to escape hunger. The U.N. says thousands of Somalis are leaving their country, ending up in parched and overcrowded refugee camps. Dadaab in Kenya is the world's largest refugee camp. Intended for 90,000 people, the U.N. says there are now more than 380,000 there. 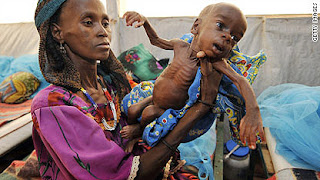 Emergency relief workers are getting increasingly alarmed at the scale of a slow-moving disaster in the Horn of Africa, where months of dry weather is said to be threatening famine and a new humanitarian crisis. Last week U.N. agencies monitoring a severe drought in Somalia, Ethiopia, Kenya and Djibouti increased the volume on existing warnings over food shortages in the region, a consequence, they say, of an unprecedented dry spell, instability and higher global food prices. Reports suggest parts of Somalia may already be on the verge of famine, a repeat of the emergency situation that occurred when the central government collapsed there two decades ago.

Officials in the field are reporting adults from Somalia turning up in camps in Ethiopia and Kenya showing signs of severe malnutrition, with some even dying shortly after they arrive. In April officials estimated that up to 8 million people in the region will be in need of emergency food aid as a consequence of the drought. That number has now been increased to 10 or 11 million in urgent need. The U.N.'s Office for the Coordination of Humanitarian Affairs (OCHA) is calling it the worst drought the region has experienced the early 1950s. And the problem is made much more difficult by the continuing anarchy and civil strife in most of Somalia, coupled with cross-border raids and violence between pastoral communities in the Ethiopian-Kenyan border. However, refugees are being pushed from Somalia for a simple lack of food, said OCHA spokeswoman Stephanie Bunker. She estimates about 5,000 people are entering Ethiopia from Somalia every week. 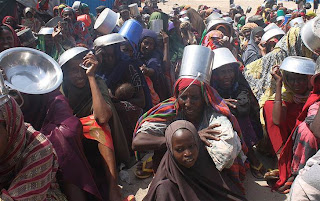 "What people are saying is that those people who are arriving are arriving in bad shape," Bunker said in an interview. "We have not heard that there is a famine yet, but it is concerning that there are parts of Somalia where we simply don't know what the situation is and what condition the people are in." Bunker confirmed that some of those new arrivals have died from malnutrition. 'Downhill from here' Normally taking the lead in coordinating relief efforts in such cases, OCHA has been joined in a chorus of warnings by the United Nations Children's Fund (UNICEF), the Food and Agriculture Organization, the office of the U.N. High Commissioner for Refugees and the World Food Programme. All five U.N. organizations are working overtime to bring more publicity to the worsening situation in a news cycle dominated by the Arab Spring. Drought conditions and extreme food shortages in the area at expected to last into 2012.

"The prognosis is that it's going to go downhill from here," Bunker said. "Resources are woefully inadequate," OCHA emergency relief coordinator Valerie Amos said in an interview with Minnesota Public Radio last week. "We have an appeal that is at the moment only 40 percent met. Some of the key sectors that are needed to protect and save the lives of people in Somalia are not being addressed at all." Other U.N. agencies are painting a similarly dire picture of the food security situation in East Africa, but say they are assisting as best they can. "Desperate hunger is looming across the Horn of Africa and threatening the lives of millions who are struggling to survive in the face of rising food prices and conflict," WFP executive director Josette Sheeran said in a release.

"It is essential that we move quickly to break the destructive cycle of drought and hunger that forces farmers to sell their means of production as part of their survival strategy." A map disseminated to governments by OCHA shows areas in the four countries close to the verge of famine, increasing the odds that that agency will issue a fresh appeal for relief funds and food aid soon. Areas deemed to now exist in a state of emergency include the coastal region of Somalia northeast of Mogadishu, the far eastern and southern corners of Ethiopia, and most of Kenya's northeast frontier. Many of those regional emergencies are now classified as "critical" by the U.N. office and are at risk of tipping over to the worst classification of "famine/catastrophe" OCHA says.

Kenyan government blames climate change Officials blame the failure of a normally wet season between April and June to deliver enough rain to sustain wild forage for cattle and other domesticated range animals, let alone enough rainfall sufficient for crops. But the dry spell has been traced to the beginning of last October when an anticipated rainy season also failed to deliver. In June FAO officials declared that the persistently lower-than-average levels of precipitation in the eastern most part of the African continent had become "a chronic feature for the region." Kenyan government officials have blamed climate change on a recurrence of droughts that have led to blackouts in Nairobi and increased cross-border violence with neighboring Ethiopia as pastoral communities continually shift their herds in search of water and forage.

UNICEF estimates that about 25 percent of people in Kenya's far north are now suffering from acute malnutrition, including more than 37 percent of those living in the Lake Turkana area. Throughout the Horn of Africa the aid group warns that "millions of children and women are at risk from death and disease unless a rapid and speedy response is put into action." Officials at UNICEF estimate that numbers of malnourished children in the Horn of Africa countries has increased by 50 percent over levels previously recorded. "The last two rainy seasons were very weak and in part they failed in that region, and that's one of the key factors," said Michael Klaus, East Africa regional communications director for UNICEF, in a phone call from Nairobi.

"The number of people coming over the border from Somalia to Kenya and Ethiopia has increased significantly. In the past two weeks it has definitely increased very much." WFP says it will undertake a new emergency needs assessment this month but is already ramping up food relief efforts in areas hard hit by the drought. Already that agency says its extending emergency food assistance to 4.3 million in Ethiopia and around 2.4 million in Kenya. Officials there expect millions more to be added to the food aid rolls once the needs assessment is complete.

Posted by VesInteL at 7:51 PM No comments:

Watch videos at Vodpod and more of my videos